These were definitely my favorite gameplay feature of Pirates of the Caribbean Online. They were large, multi-wave assaults on the game's major islands (Port Royal, Tortuga, and Padres Del Fuego) by Jolly Roger's undead forces, which would occur at (seemingly) random times on random days. The enemies would get stronger with each wave until, finally, Jolly Roger himself would appear during the final wave, and we had to defeat him in order to win.

Invasions were very fun and exciting because they were a sort of massive battle between the players who happened to be present at the island and countless undead enemies, who appeared at a far greater concentration here than at any other place in the game. I remember being thrilled whenever an Invasion was announced, and would go out of my way to participate in them. The number and strength of the enemies was adjusted according to how many players were present; although I tended to prefer Invasions on quiet or moderately active servers, I did take part in one or two on a busy server, and they were the largest, wildest events I ever witnessed in the game.

The real treat, though, was the fact that the game's developers finally put in Jolly Roger as an attackable NPC; prior to the introduction of Invasions, he was an important story character, but never appeared in-game outside of a few cutscenes. The first time I saw him strolling on the island during the last wave of an Invasion, killing even high-level players with a single blow while taking nearly no damage from their attacks, I was awed. In earlier Invasions I did my part to attack him, but learned rather quickly that this was pretty foolish unless you had a very high-level character; afterwards I generally would let everybody else attack him while I hung back and watched because, of course, I didn't want to be insta-killed by a thunderbolt that could hit me no matter where I was on the island.

Despite how much I loved them, I will admit that Invasions did have a few flaws: they occurred too infrequently (I recall that, on average, I could participate in one only every few weeks); they were less fun for low/mid-level players if there were too many high-level (40+ Notoriety) players present, particularly during the later waves, where it seemed like all the enemies were far too strong; and they tended to be on the easy side, as I remember that a large majority of the Invasions I took part in ended up in victory for the players—in fact, only about two or three Invasions I took part in ended up in the players losing, and it was such a rare event that, on one occasion, I even bothered to take a screenshot (click for larger version): 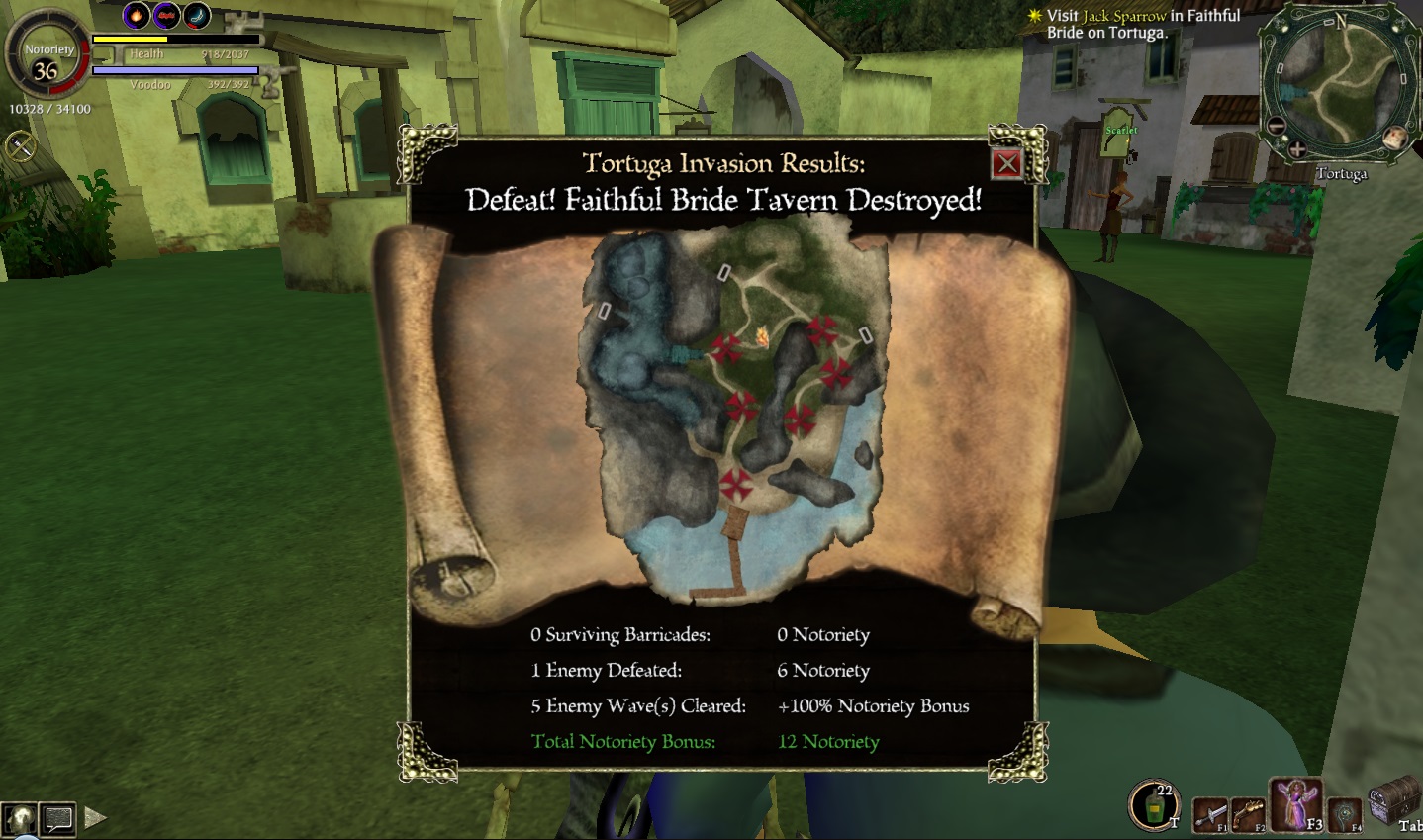 Sometimes, when I was in a devilish mood and saw other players near Powder Keg Runners, I would pull out my pistol or grenade (which were both long-range weapons that could deliver a great deal of damage very rapidly), run back a safe distance, and then kill the Runner as quickly as possible; if I was lucky, the other players would be insta-killed (i.e. knocked out) by the Powder Keg Runner's explosive death. I would then deliberately ignore their calls for revival—sometimes, I would walk right next to them while they were knocked out and not revive them, even if I wasn't occupied with fighting any enemies. They would eventually just teleport to jail, or perhaps become angry and yell at me for ignoring their plight, which would always put a smile on my face. (Such are the joys of griefing!)