I am referring to this specific guide book for Sonic Adventure 2: Battle published by a company named Versus Books: 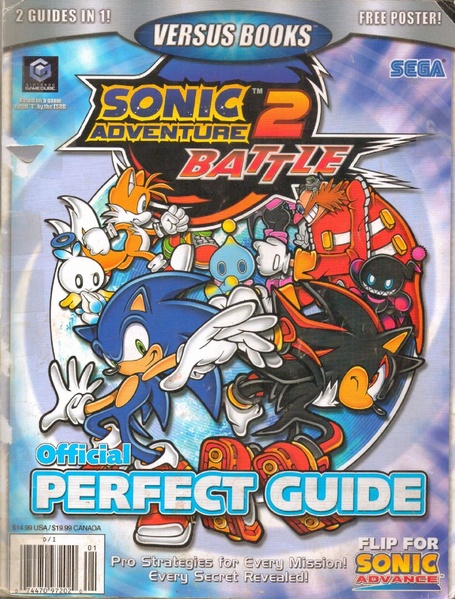 Interestingly, the book is actually two separate guides, with the other one being for Sonic Advance, a Game Boy Advance game that is able to connect to Sonic Adventure 2: Battle via the link cable for the two systems; the other side of the book is the front cover for the Sonic Advance guide, which is shown below. 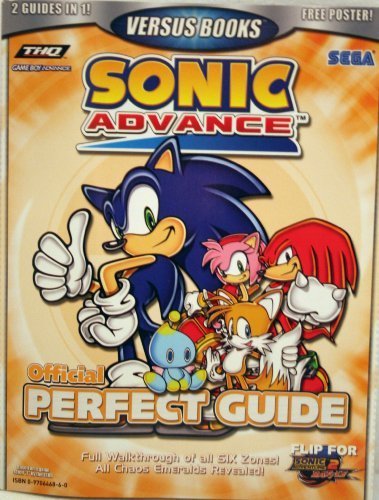 Admittedly, when I was a kid I didn't read much, instead preferring to watch television, play video games, browse the Web, or otherwise entertain myself; back then, nearly all the books I read were those that I had to read for school. This book, however, was one of the major exceptions in those days: it was bought for me after I saw it in the store one day, and afterwards I read it for fun quite frequently—no doubt its smooth, glossy, full-color pages, along with the fact that it described a Sonic the Hedgehog video game, kept me interested. I remember that I actually got the book a while before I got the game itself, and hence for a time I was reading a guide book for a game I did not yet even own, but nevertheless I still very much enjoyed reading through it; the fact that I had spent such a great deal of time reading this book certainly motivated my eventual purchase of the game itself (as well as my later purchase of Sonic Advance).

After I actually got Sonic Adventure 2: Battle (most likely during the end of 2003 or the beginning of 2004), of course, I began to use the book for its intended purpose, and turned to it for walkthroughs, tips, and secrets for whatever part of the game I was playing, but, even then, I still continued to read sections of it purely for fun. For a long time it was my only guide for the game, because, despite already having Internet access in our house, I did not think to search online for more guides and walkthroughs for the game until at least the late 2000s. This was most likely because I found the book to be helpful and thorough enough that I didn't feel the need to look for anything else; it provided me much assistance with boss battles and raising Chao in particular.

My copy has become quite worn over the years, with ripped covers and creased and detached pages, and I must handle it with some care now. Despite the existence of many other online guides and walkthroughs, over the years I still continued to use this book as my primary source of knowledge and help for Sonic Adventure 2: Battle; to turn to some other source would have just felt too strange to me.

For those interested, both the Sonic Adventure 2: Battle guide and the Sonic Advance guide of this book are available in full at the Internet Archive.