We got Internet access in our house for the first time around November 2003. At the time, I was using Windows XP, which comes bundled with Microsoft Internet Explorer 6 (IE6) by default, so my first peek at the World Wide Web (and, I recall, some FTP sites here and there) was through IE6. Of course, back then I didn't even know what a Web browser was; I simply believed that the little light blue lowercase e was how I opened the Internet.

As I am a fellow who tends to get stuck in his ways and is largely skeptical of change, I continued to use IE6 as my primary Web browser for nearly six years, until September/October 2009, when I upgraded from Windows XP to Windows 7. Even then, though, the only reason I stopped using IE6 was because it just doesn't work on Windows 7, despite my efforts at the time to try to get it to work.

For me, Internet Explorer 6 will always be the browser of the glorious 2000s Web. I miss clicking those large Back

buttons, with their green circle enclosing the arrow; I miss the neat little Home

button; I miss the enormous Favorites

button, placed in between all of the other buttons; I miss the address bar being placed at the very bottom of the upper frame of the browser, on its own row; I miss the little Windows logo

at the top-right corner of the browser, which would animate every time a new page was loading; I miss tabless browsing (yes, I am serious—IE6 does not support tabs at all, and so I grew so accustomed to Web browsing without tabs that, even today, in 2020, I still prefer not to use them); and I miss the browser as a whole like you might miss an old friend you hardly see anymore. IE6 is not dead—I can still start up my Windows XP virtual machine and see my old friend—but every year it becomes more disabled, as the number of Web sites which still work on it dwindles.

The early/mid-2000s were a wonderful time for Internet Explorer. According to TheCounter.com, OneStat.com, ADTECH, and WebSideStory (data which Wikipedia has very neatly organized), during the early and mid-2000s Internet Explorer absolutely dominated the Web browser market, with some years having a market share of over 90%, or even over 95%; no doubt that IE6 contributed the most to these numbers among all of the then-existing versions of Internet Explorer. It truly was a great time, back when Microsoft, through the immense market share of IE6, could basically dictate Web standards, and when you didn't really need to worry that much about cross-browser compatibility, because even if you only ever tested your Web site in IE6, at one point in time you could be confident that over 95% of Web users would be able to view it without issues. Not even Google Chrome today has that sort of dominance.

Now that hardly anybody uses IE6 anymore, Web designers and developers have become quite smug, and ridicule it without hesitation and like to feign horror if you mention it to them. These days, they seem particularly eager to doubt the value of designing Web pages to be compatible with old browsers, and proclaim that old browsers held back (and are still holding back) the Web (or at least Web design), but I like to say that old browsers kept the Web grounded, and kept Web design sane. Ever since the early 2010s, when IE6 usage became negligible in the United States (China at the time still remained a glorious bastion of IE6), hip Web design morphed into something truly awful: bloated, mobile-centric, space-wasting, childish flat design, which by and large focuses more on looking pretty than on being lightweight, compatible with old browsers, and easy to use. Internet Explorer 6, the great guardian of sensible 2000s Web design, had fallen, and consequently many, many sites have now embraced this cancerous fad. 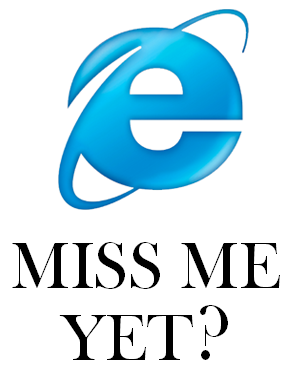 We all will, eventually.