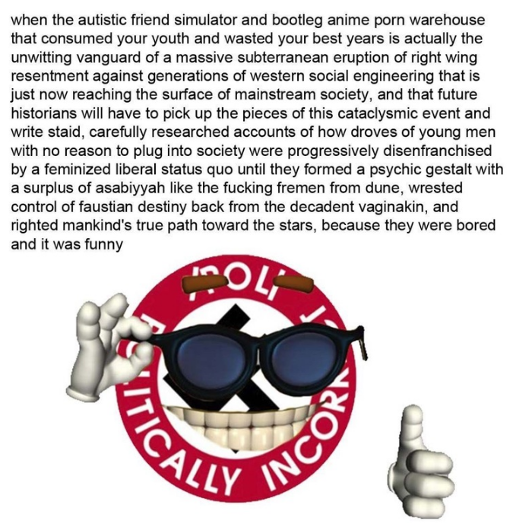 But seriously: /pol/ is a libertarian board, you Nazi jackasses.

But seriously seriously: /pol/ ruined 4chan, or at least made it less fun. Back when the site was dominated by /b/ culture, we did everything for fun—for the lulz. Most folks were either fiercely apolitical, or even left-leaning, but politics was largely avoided as a topic of discussion, and raids, pranks, and trolling were done for the lulz, not to attack political enemies.

Since /pol/, the site has been flooded with Stormfags and, since the 2016 election, with normalfag Trump supporters; the average IQ and quality of posts has dropped accordingly. Had the political angle been absent, I highly doubt that 4chan would be as mainstream as it is today. (It is not a good thing for the site to be mainstream, by the way: we lose our unique culture when that happens.)

I don't mean to say that /pol/ has contributed nothing in terms of memes or pranks to the history of the site, but it certainly has not helped it stay the underground troll hangout that it used to be. Now that /pol/ has taken /b/'s place as the largest and most culturally influential board on 4chan, I fear that many newcomers to the site are drawn to it by its politics, rather than the cleverness, unique culture, and online antics that used to characterize 4chan back in the day (or /b/, at least, which they might have mistaken for the whole site, anyway).

Politics is serious business, no sarcasm intended; to mix it with 4chan is just begging for disaster. I have my own political beliefs, but I believe that, for most things, the best politics is no politics. Despite this, I still find myself browsing /pol/, if only because every once in a while a good meme comes from it, and also because many /b/ oldfags frequent the board, now that /b/ these days has become little more than a porn dump. (At least /pol/ and 4chan veered right, rather than going full SJW—that would have been even more upsetting for me to witness.)